Pus In Milk…mmm Does A Body Good! 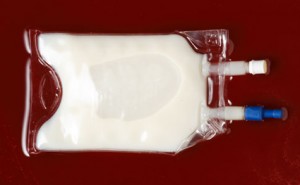 After much research I am certain that I have been drinking puss for 35 years!  Just watch Food Inc.

How much pus in milk?  1-1.5 million white blood cells (that means pus to a non-biologist) in every milliliter to be exact & there are 3785ml in 1 gallon.  That means the USDA allows 3.78 – 5.67 BILLION white blood cells (again, a pretty word for pus) per gallon of milk.  Are you sick to your stomach yet?

If that little tidbit does not cause you to re-think milk, cheese & ice cream (I know, take anything but my Tillamook Chocolate Peanut Butter, right) then this may.  Have you ever heard of rBGH… say what?

Recombinant Bovine Growth Hormone is a genetically engineered copy of a naturally occurring hormone produced by cows. Manufactured by Monsanto Company(surprise, surprise), the drug is sold to dairy farmers under the name POSILAC, though you’ll also find it called BGH, rBGH, BST and rBST. When rBGH gets injected into dairy cows, milk production increases by as much as 10-15%. The use of rBGH on dairy cows was approved by the Food and Drug Administration in late 1993 and has been in use since 1994.

And what about the cows? rBGH use causes suffering to millions of animals “revving” up their systems and forcing them to produce 100+ gallons of milk a day.  I have a friend with a milk cow and she let me know that 10 gallons a day is amazing.  Even the FDA admits that cows injected with rBGH could suffer from increased udder infections (mastitis), severe reproductive problems, digestive disorders, foot and leg ailments, and persistent sores and lacerations.

SO… if the pus in milk doesn’t get’cha the rBGH or massive amounts of antibiotic in our dairy products will!

Ever wonder why our daughters are reaching puberty at the age of 10?  Maybe that “required” milk at school lunch is NOT such a great idea.  Eat the broccoli instead!  Or how about the massive amounts of people taking acid reflux meds?  Could it be that they are lactose intolerant?  Indigestion, constipation, obesity, diabetes… all of these could be due to a lifelong love for dairy.  After all 90% of the Asian population are lactose intolerant.

This is a pervasive problem and educating myself as well as my friends is a must.  Be sure to subscribe to weekly updates and keep learning with me so we can spread the word!

Your wellness advocate and friend,

Sassy, classy and kick a$$y Marketing Muse with a passion for living life well. I help solopreneurs build they online brand with grace and ease. My book on wellness proves that Education Beats Medication Click Here for a sneak peek. Stay tuned and connect if you're ready to start living your bliss online & off!

Yes I totally agree, it is SO disgusting what is found in milk. Antibiotics, hormones, pus, blood, ick! Great post, Dani! I’ve cut out most dairy for the last few years and I feel amazing! Check out my experience with dairy and why I decided to cut it out (and how– it was tough!) http://bethleahnutrition.com/stop-youre-right-now-put-cheese-secrets-dairy-industry-doesnt-want-know/

WHAT'S YOUR DATA WORTH?